Bubble tea, also called pearl tea (珍珠奶茶), is a quintessentially Taiwanese drink, but how old is the chewy tapioca ball-filled beverage, who invented it and how did it become to be so popular?

The origins of bubble tea are steeped in mystery and still hotly debated, but according to the orthodox version of events, the story begins in 1980s Taiwan.

At the time something called “bubble tea” — quite different from the drink we know today — was all the rage. Made with either black tea or green tea, brewed tea was sweetened with sugar syrup and then shaken through ice in a cocktail shaker to both chill the tea and produce a copious amount of bubbly froth at the top of the glass, similar to a “head” on a freshly poured pint of beer. The shaking was initially done by hand, but later machines were developed to automatically agitate the tea mixture. 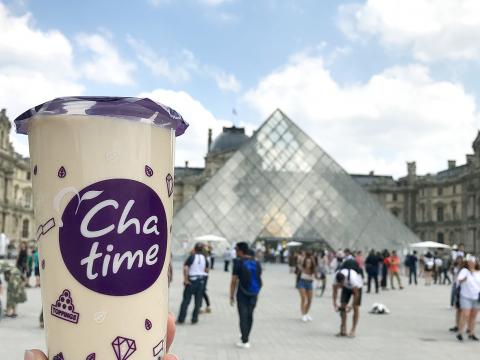 Hanlin Tea Room insists it came up with the idea in 1986 when its founder Tu Tsung-ho (?宗和) spotted white-colored tapioca balls on sale at Tainan’s Yamuliao market. Tu had a sudden flash of inspiration and bought some of the balls home, and after cooking them through, added them to some milk tea. He found the texture pleasing and soon christened the new beverage pearl milk tea on account of the pearly, semi-translucent white tapioca balls. To this day, customers at any branch of Hanlin Tea Room can choose between either the original white tapioca balls or the more common black variety, made with brown sugar. 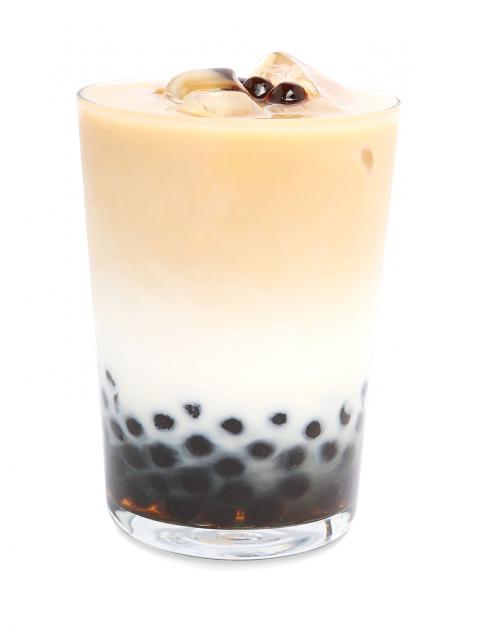 Photo Courtesy of Cha Cha The

However, Chun Shui Tang maintains it is the true inventor of the beverage, which it says was created by a then-20-year-old female employee, Lin Hsiu-hui (林秀慧), the following year in 1987. One day at the teahouse, Lin experimented by mixing her favorite childhood snack, tapioca balls, with iced milk tea and also lemon black tea to produce what the company claims was the world’s first cup of pearl milk tea.

The two companies became locked in a bitter dispute, filing lawsuits against each other and eventually going to court to settle the matter. However, since neither one was able to successfully patent or trademark their product, by the mid-1990s, pearl milk tea featured on the menus of Taiwan’s teahouses, which were popular hangouts for students and businessmen to relax and chew the cud in the days before the influx of coffee shops. With the introduction from abroad of machines that automatically seal the top of takeaway cups with a thin film of plastic, the modern takeaway version of the beverage was born.

However, there is an intriguing alternative explanation: bubble tea’s earliest incarnation could in fact be traced back to the days of the British empire. In British Malaya (modern-day Singapore and Malaysia) an iced drink/desert, usually called cendol or chendol, began to be drunk to provide respite from the tropical heat.

Brightly-colored, worm-like gelatinous strands, usually made from rice flour or sago, are added to coconut milk which has been sweetened with sugar and combined with ice to make a refreshing drink or iced snack. It is thought that cendol may have been inspired by locals observing British expatriates adding milk to their tea and may have originated in port cities such as Malacca or Penang, where refrigeration technology from British ships would have provided the ice. Today, Cendol is a ubiquitous thirst-quencher drunk across South East Asia, including Thailand, Vietnam and Indonesia and when served in a tall glass, bears an uncanny resemblance to Taiwan’s bubble tea.

Meanwhile, chewy tapioca balls, called fenyuan in Chinese, somehow made their way to Taiwan from abroad — possibly via China, after being presented to Empress Dowager Cixi (慈禧太后) as tribute — and began to be used as an ingredient in sweet snacks at Taiwanese night markets. Contrary to the competing claims of the teahouses, perhaps the real origin of bubble tea is to be found in Taiwan’s night markets, possibly inspired by a Taiwanese night market vendor sipping on a glass of cendol during a trip to Singapore or Malaysia.

Whatever the true origin of bubble tea, today takeaway tea shops abound on almost every street corner and rival chains fiercely compete for business, continually innovating wacky new flavor combinations and textures to keep customers coming back for more. In recent years, Taiwan’s quasi-national beverage has successfully seen off the coffee juggernaut as well as multiple food safety scares and looks set to stay a permanent fixture of Taiwan’s culinary scene for many years to come.

Comments will be moderated. Keep comments relevant to the article. Remarks containing abusive and obscene language, personal attacks of any kind or promotion will be removed and the user banned. Final decision will be at the discretion of the Taipei Times.
Sours: https://www.taipeitimes.com/

The interior has been remade with a modern, clean design, featuring warm wood tones, green apple-colored chairs and elegant light fixtures. It's spacious, with two dining areas on the main floor as well as seating on the second and third floors.

A sign on the window advertises a "welcoming party" for June 17th–30th, telling customers, "Get 1 free bubble milk tea for every $20 purchase, and so on." Also through June 23rd, they're offering buy one, get one bubble milk tea during happy hour (from 2-5pm).

We asked for the hours and were told they open at 11am daily, but close at different times each day, usually around 10pm. They might also be closed on Tuesday for more training. (Probably a decent idea, as the few Yelp reviews, for the most part, have not been kind.)

The tea lounge is part of Hanlin International Tea Restaurant Group, established in 1986 in Taiwan. We've asked for several months to speak with someone to get more background on the place, but were told today that the owner is in Taiwan. We were also told a grand opening will be held on July 2nd, so we'll share more details on that if we get them.

Our experienced chefs know superior flavor begins with superior ingredients. We carefully prepare the highest quality meats and produce using a combination of traditional techniques with a modern flair.

Unwind with us during a Happy Hour, join us for holiday celebrations, or find us out and about at local expos!

These small bites are perfect pair with a range of our tea drinks. Come and try our Hanlin Style Popcorn Chicken as afternoon tea snack.

Property for sale with creek