Thank you for your company today! 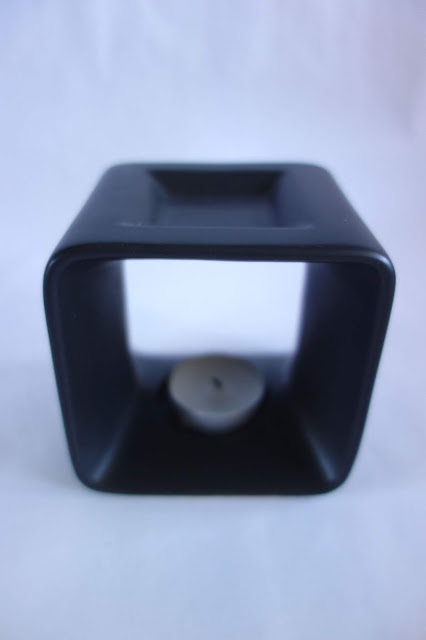 I found this at the back of my closet. It was a gift that I used a lot when it was new and then had forgotten about. It's an oil burner. Fragrance oil is poured in the bowl on top and the scent disperses with the heat of the candle. 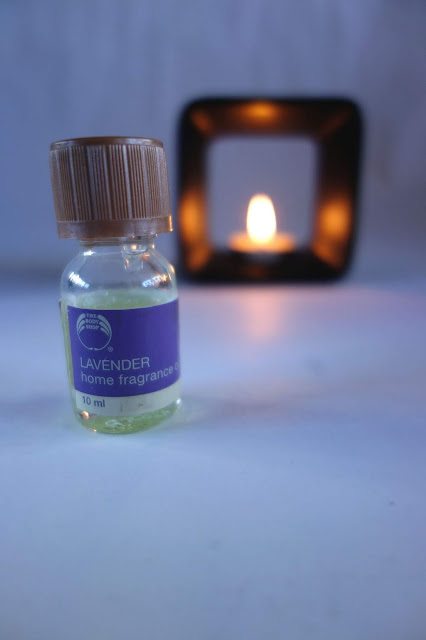 Scent diffusers have become popular in the past few years to help create a calm, relaxing environment. Instead of buying one, I should just use this again. My favorite scents are lavender and rosemary. Plus I'll get to use the bag of tealights that's also hiding at the back of the closet. 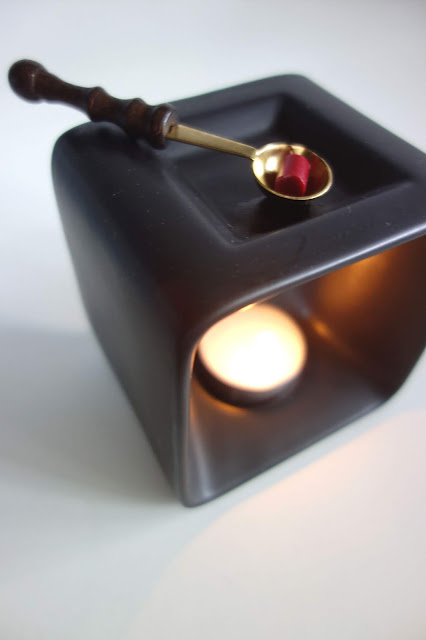 But I found a new use for my oil burner...something to use in tandem with my sealing wax spoon. 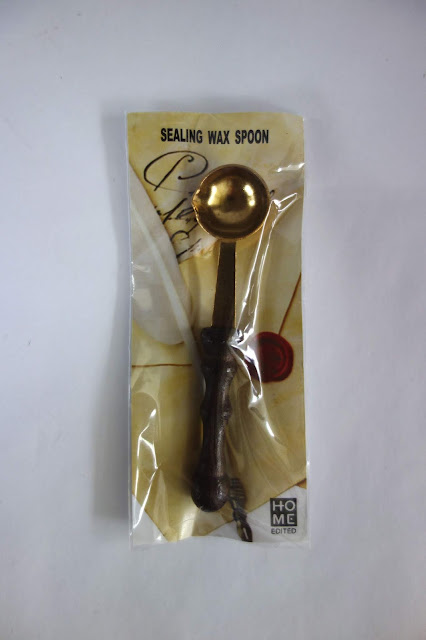 This spoon is a tool for sealing envelopes with wax. 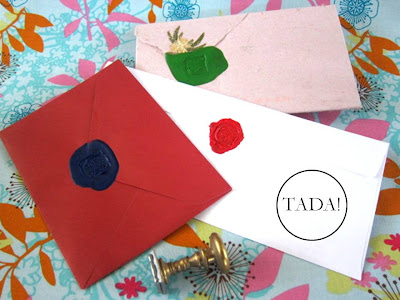 The wax seal is reminiscent of the Middle Ages -- as  a way to close a letter, a decorative touch, and the seal that was pressed on was a signature, indicating who the letter was from. 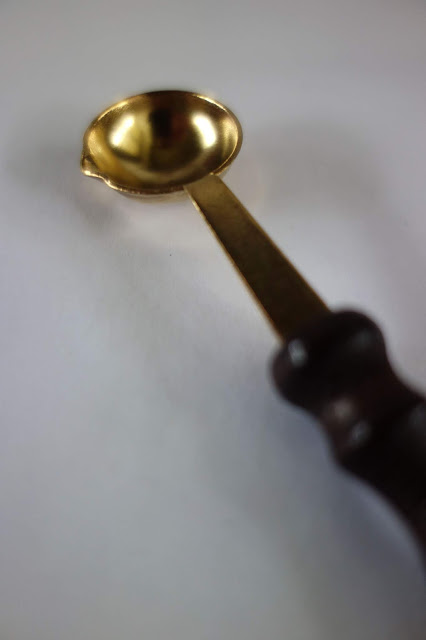 The sealing wax spoon has a pouring spout for the melted wax and a wooden handle to keep the handle cool. 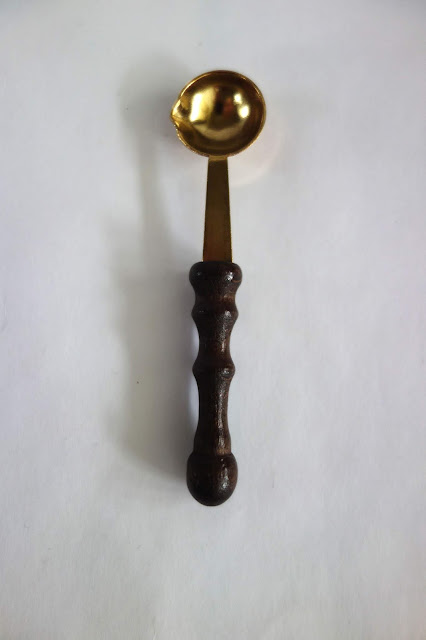 I bought this at a gift shop but they are easy to find on-line. You can also try using an inexpensive measuring spoon; just wrap the handle with clay or well-padded cloth to keep your fingers from burning when the metal becomes hot. 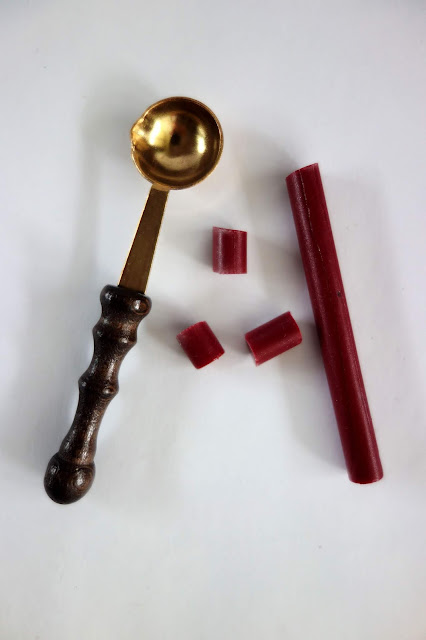 Put small pieces of sealing wax in the bowl of the spoon. 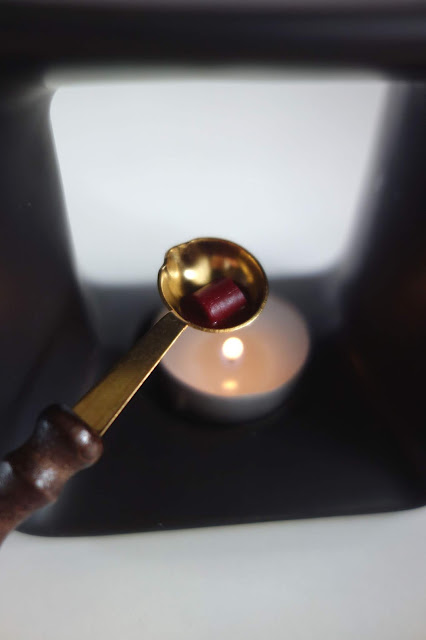 Put the spoon over the flame. 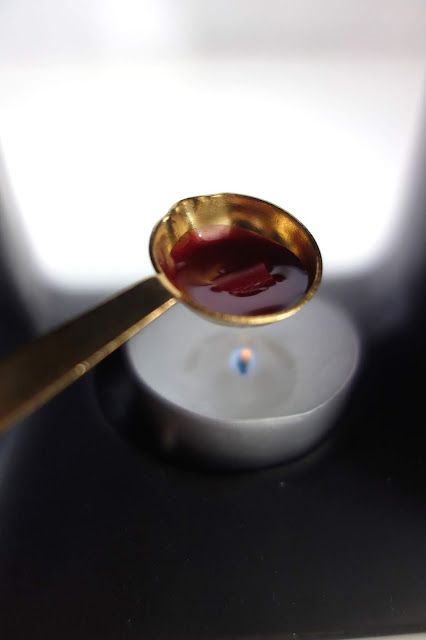 The sealing wax melts in a matter of minutes. 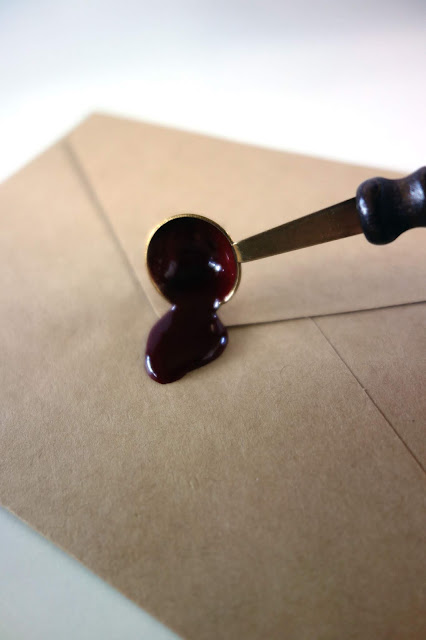 Pour the melted wax on the envelope flap. 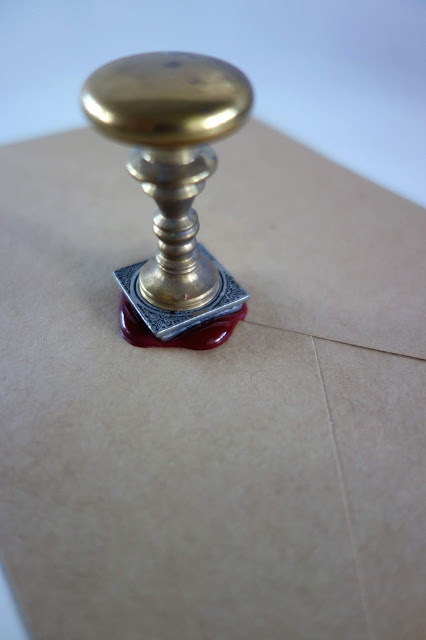 Firmly press your wax seal stamp and let it stand for a few minutes to get a good impression. 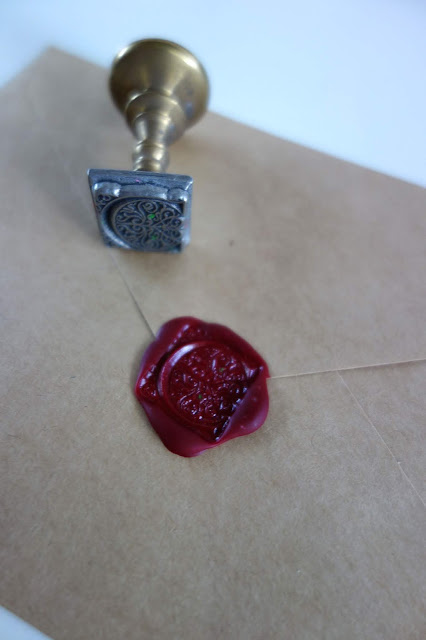 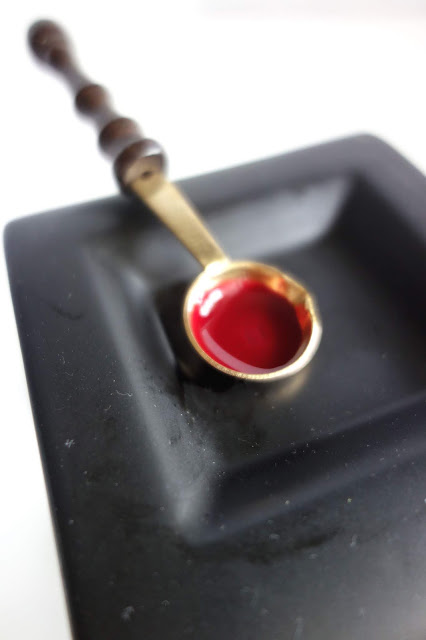 I use the tea light candle of this oil burner to melt the wax. I use the top part of the oil burner to park my spoon while it cools. It also makes the process mess-free (no wax dripping on my desk). 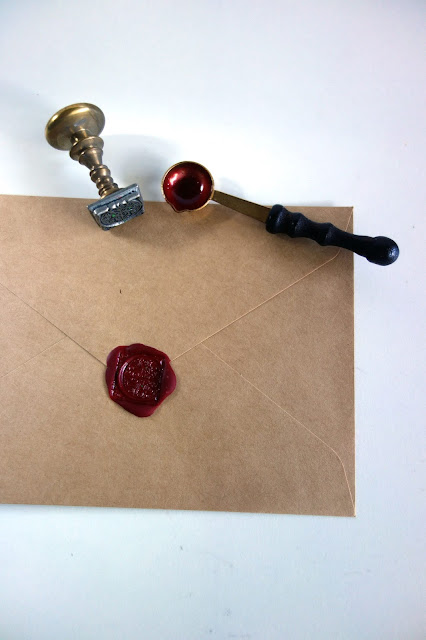 I was able to repurpose my oil burner and with my wax seal kit, I turned some plain envelopes from blah to TADA!

Sometimes, you really do find the weirdest things, when you’re out antiquing. Over the years, I’ve stumbled across everything from Pieces of Eight to razor-blade sharpeners, pill-rollers and writing slopes. But sometimes…just sometimes…you find something so obscure and unheard of that not only have you never seen it before, you’ve never heard of it before, and you’ve never even come across one on the internet! Likely, you’ve never even considered that such a thing might even exist!

Such was the case last week!

It was on a very windy Sunday morning in July when I picked up this curious rectangular, metal object. It was pointed out to me by the stallholder as something in which I might show a particular interest! And boy, was he right!

I remember staring at this object, a mounting sense of curiosity building up inside me as I laughed at it and picked it up.

“What is it!?”
“Ever seen something like this before?”
“Hell no! What’s it do?”
“It’s pretty fantastic, huh? It’s for heating sealing-wax! You like that kind of old-world writing stuff, don’t you?”
“Well…yeah!”
“Buy it! You’ll never see another one of these, mate!”

Deciding that he was probably right, I haggled the price down and handed him the money. Apart from a bit of rubbing and wear, the piece was in absolutely wonderful condition – no cracks, no scratching, no dents, no missing or broken parts – everything was in perfect working order! A bit stiff in its operation, perhaps, but nothing that a good cleaning couldn’t fix!

The furnace, or stove, is comprised of four main parts.

The second part is the two-piece burner or spirit-lamp. This is the little rectangular unit that slides out of the bottom compartment. The top half of the burner comprises of the wick, and the adjustment-knob on the side, with the reservoir underneath.

It’s basically a small oil-lamp which burns kerosene or lamp-oil. The burner-unit is unscrewed, the reservoir is filled with oil, the wick and burner-unit are screwed back on, and once the oil has wicked its way up the wick, it can be lit with a match. Turning the wick up creates a strong, bright flame that is used as a heat-source for melting the wax.

The sealing wax itself is stored in the third component – the wax pan. The pan is basically a metal dish or trough into which chunks or sticks of sealing wax are placed to be melted. The trough is heated from below by the flame of the spirit lamp, and once the metal is hot enough, the wax inside the trough melts into a liquid state.

Riveted to the sides of the body of the stove is the fourth component of the stove – an insulated carrying handle – suggesting that the stove is meant to be portable – this is borne out by the fact that the burner-unit fits into flanges or grooves inside the lower compartment of the stove-body, presumably to hold it in position under the middle of the wax-pan, and to stop it from sliding around when it’s being carried – important when you’ve got boiling hot wax and open flames around!

Is It A Rare Item?

I suspect that it is. I mean how many antique, working sealing-wax stoves have there got to be in the world? A look online revealed a surprisingly large number of sealing-wax melting devices, variously labeled as ‘stoves’, ‘kilns’ or even ‘furnaces’, but these were all modern ones. They’re low capacity, low-heat devices, usually incorporating a tealight candle.

They’re cheaply made with wooden and metal frames and bases, and are used only for melting small quantities of wax – enough for maybe one or two seals at a time. None of them have any age to them, and none of them are designed for large-scale, long-term use. They’re sold more as a cutesy gimmick, not as an actual piece of office or desktop equipment.

During all my searching, I found only two other antique sealing-wax stoves online, and only one of them was similar in design to mine. This would lead me to believe that they aren’t that common, and that if others do exist out there, then they’ve probably been mis-identified…which wouldn’t surprise me – after all, how many offices would’ve had a device like this sitting around?

What Is The Purpose of the Stove?

The stove is designed to melt and liquefy sealing wax, used for sealing documents and parcels, and provide a device for evidence of tampering. Traditional sealing-wax is very hard and brittle – it’s designed to shatter and crack if any stress is applied to it. Unfortunately, this quality means that it’s also much harder to melt than conventional candle-wax, or even modern, soft-textured sealing-wax.

Given that it would take higher heat and a longer time to melt traditional sealing-wax, it would make sense that any office where documents had to be sealed regularly, such as a post-office, bank, or lawyer’s office, would have a stove like this constantly lit, so that a supply of hot, liquid sealing-wax was on standby at the moment’s notice. To seal a document, one simply had to open the lid, scoop out the required amount with a ladle, and pour it over the document or parcel which required sealing.

How Does It Work?

Very simply! You place sticks or pellets of sealing-wax in the pan at the top of the stove. Drop the pan in, and close the lid. Then you fill the spirit lamp or burner with lamp-oil, or kerosene. You let the fuel rise up the wick, then light it with a match, like any other oil lamp. Turn the wick up to the highest level it can go without smoking, and then slide it into the bottom compartment between the two guide-rails. Then close the lower door (or leave it open, up to you).

Once the lamp is lit, it’s just a matter of waiting for the flame to heat the pan, to melt the wax down to a liquid state. Obviously, the more wax there is in the pan, the longer it takes to melt. I imagine they did this on a case-by-case basis – they’d melt just enough wax to make a few seals, and after every 2-3 uses, they’d toss in another stick of wax to melt, so that it’d be liquid by the time they needed to use it again, while keeping the stove burning all day long throughout office hours.

The carrying-handle on the stove suggests that it was meant to be portable – and that it was intended that the stove could be moved from desk to desk around a large office so that different people could use it, rather than taking their documents to a central table to seal them when needed.

How Old Is the Stove and Who Made It?

I honestly don’t know. I’d estimate early 1900s, probably not later than after the First World War, and as far back as the 1880s or thereabouts. There’s no real information on the device itself that gives us any information as to its history.

The only information provided is “SUTHERLAND, THOMSON & Co., 31 Tooley Street, London“. They’re identified as late as the 1930s, as being a supplier of “Dairy equipment and Scientific Glassware” – but that doesn’t mean that they made the stove. They might’ve sold it as the retailer, or simply have bought it for their own use in sealing documents and parcels. I saw one other one online supposedly sold by the same company, so they may have been an established retailer, although I have no real proof one way or the other. There are no patent-numbers, model-numbers, serial-numbers or any other marks on the device at all that tell us anything about it.

This entry was posted in 20th Century, Antiques.
Bookmark the permalink.

How to create your own wax seal

How to make wax seals: