Subnautica Cyclops – How To Build, Get Blueprints, Upgrades 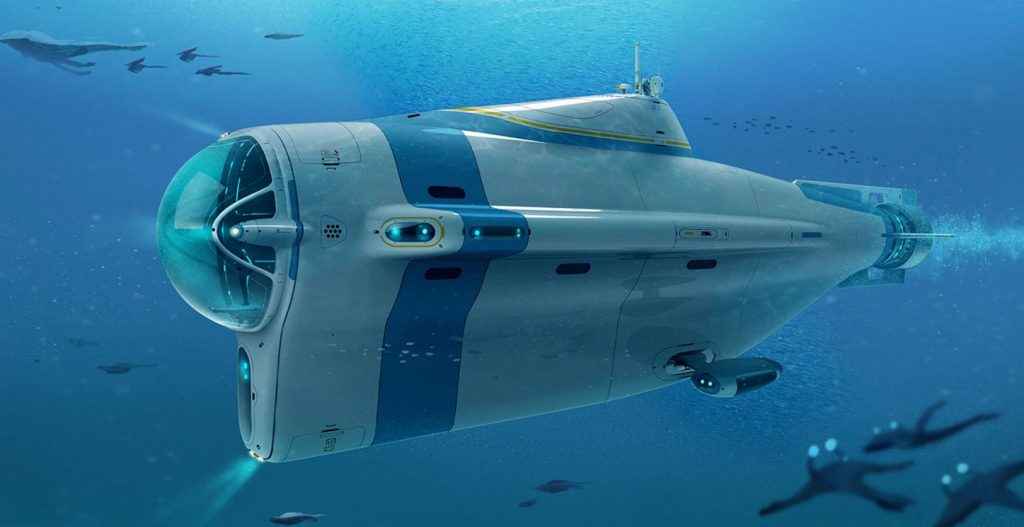 The Cyclops is a vehicle in Subnautica. It is a submarine and can be built in the Mobile Vehicle Bay. However, you have to explore the depths of planet 4546B in order to get it. Here is how to build the Subnautica Cyclops and the upgrades you can give it.

The Cyclops can store a lot, including a Prawn Suit and a Seamoth. It can also be used as a moving base of operations and can be equipped with furniture. The Cyclops can have three different speeds and each setting affects the amount of noise created.

Subnautica Cyclops – How To Build 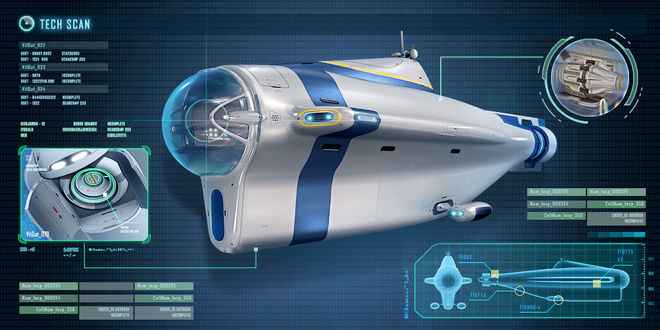 Various upgrades can be installed into the Cyclops. To do this, head to the Vehicle Upgrade Console on the port side. Here you can also change the vehicles name and colour. Below is a list of all the upgrades and what you need to craft them.

This upgrade increases the Cyclops’ maximum crush depth. This allows it to survive greater pressure.

This upgrade decreases the total power consumption of the Cyclops by 300%.

This upgrade replenishes the power of the Cyclops by using heat from the ocean. At 35 degrees celsius, it has a 10% charge rate, but this increases up to 50% the hotter it gets.

This will emit a wave detailing data of the area on the HUD as well as revealing the topography of the area.

This upgrade will automatically extinguish fires that break out due to incoming damage.

This will automatically repair any Seamoth and Prawn Suits you return with.

This increases the number of creatures a Decoy Tube can hold. It will increase to five with this upgrade.

The final upgrade will temporarily project an electromagnet shield around the Cyclops. This will repel and negate all incoming damage.

That covers it for the Cyclops. What have you been working towards in Subnautica?

Check out our guide on all Subnautica Leviathans and where to find them.

Note that a few upgrades are compatible with both the Seamoth and the Prawn Suit, and both the Seamoth, Prawn, and Cyclops Depth Modules are themselves upgradeable.  In those cases, the base-level module is crafted at the mini-fabricators described above, but then improved individually at the Modification Station (not to be confused with the Vehicle Upgrade Console mentioned above).

Seamoth upgrade panel, where Upgrade Modules can be placed.

The Vehicle Modification Station inside the Moonpool where the Upgrade Modules can be created.

MoreCyclopsUpgradesProvides the framework to expand the Cyclops with lots of new upgrades and more upgrade consoles to fit them all in.
Too many features to list here.101Vehicle Upgrades In CyclopsAdds all the crafts from the Moonpool's Vehicle Upgrade Console to the Cyclops Fabricator.83CustomCraft2SMLA complete replacement for CustomCraft built using SMLHelper for the better compatibility with other mods114UpgradedVehiclesDepth modules add gradually increasingly bonuses to vehicle HP, damage reduction, speed, and engine efficiency.
Improves Hull Armor Module and adds the new vehicle Speed Boost Module115DataBoxScannerFixFixes the bug where the Scanner Room would still pick up empty DataBoxes.
Special thanks to Vlad-00003 for making LargeDepositsFix open source which helped kick start the fix for DataBoxes.128MidGame BatteriesAdds a new Battery and Power Cell that can be crafted shortly after reaching the depths of the Lost River.170BetterBioReactorAll the enhancements of the Cyclops BioReactor brought to the base
Special thanks to Waisie Milliams Hah for helping with the UI additions.218VehicleModuleFabricatorAdds a new buildable fabricator for vehicle upgrade modules.
Big thanks to OSubMarin for getting the new model working.
Now remade inside CustomCraft2.93IonCubeGeneratorMakes ion cubes from inside your own base!
Created in collaboration with ccgould / FCStudios242
Sours: https://github.com/PrimeSonic/PrimeSonicSubnauticaMods

Be advised: the Cyclops is designed to be operated by a three-person crew. Only experienced helms-people should attempt to pilot this vehicle solo.

The Cyclops is a player-controlled submarine that is constructed using the Mobile Vehicle Bay. It is equipped with a vehicle bay capable of storing a Seamoth or Prawn Suit and can be modified with a range of different upgrades.

At 54 meters long, 12 meters wide and 14 meters tall, the Cyclops is the largest vehicle available and capable of diving to depths of 500 meters, or 1700 meters fully upgraded. It can be utilized as a mobile base, capable of being outfitted with furniture and other amenities using the Habitat Builder.

Access is obtained either via the dive chamber located at the bow of the keel or via the docking bay when piloting a Seamoth or Prawn Suit. It is equipped with an onboard AI that will warn the player of danger and a beacon allowing the player to locate it at a distance. Should the player choose to build multiple Cyclops, each will have its own beacon.

Unlike most other blueprints, the player must find and scan three different sets of fragments to craft. These are:

Each set requires three fragments to be scanned to complete the component. Each component is shown individually in the PDA. Each completed component will progress the overall Cyclops blueprint by 33%; to fully complete the Cyclops blueprint, the player must find and scan nine fragments in total. It should be noted that while the East side of Mountain Island is a viable place to find many / all of the parts, a Reaper Leviathan and Boneshark patrols the area, and the parts reside at a depth of over 200m.

The Cyclops functions as a cross between a Seabase and a vehicle: the player can freely walk around inside it, only controlling it when they approach the helm control and "use" it. While controlling the helm, the player is still able to move their viewpoint in a limited arc to look around. The Cyclops takes over the movement controls, with forward and back moving the submarine in that direction, swim up and swim down being used to ascend and descend, and left and right used to turn. It cannot "strafe" sideways, nor can it pitch forward or back as the Seamoth can.

The submarine is equipped with three external cameras which are operated via the HUD. These cameras are located on the keel, sail and screw, which in layman's terms are below, above and at the rear of the submarine, respectively.

The Cyclops has three speed settings: "slow," "standard" and "flank." As well as speed, each setting affects the amount of noise generated and, in turn, the attention drawn from hostile fauna. More information on noise can be found in the Noise subsection.

A Cyclops spawns with a full set of six standard Power Cells inserted into racks of three sockets on either side of the engine, and two wall-mounted Fire Extinguishers, one located next to the damage control console and the other in the engine room. If the player takes one of these, they can replace it (or place a different Fire Extinguisher) by equipping the Extinguisher and looking at the wall bracket, which will bring up a "replace fire extinguisher" button prompt.

The Bridge is located at the bow of vessel and features a large domed glass port which is the primary viewing port for navigating.

A wall-mounted fire extinguisher can be located on the port wall and the player is able to access both the Upper midsection via a large bulkhead door and the keel via a dedicated ladder.

The middle of the HUD area is largely clear, but much of the HUD available to the pilot is not visible until the player engages the controls. The Cyclops is incapable of movement if the engine is disabled, and will display "Engine off" in red on the HUD to remind the player.

The upper midsection of the vessel grants access to the Bridge via a single large circular airlock, and to the port and starboard sides of the engine room via two bulkhead doors.

The access port to the vehicle bay is located in the center of the large room and allows the player to disembark via a docked Seamoth or Prawn Suit.

A console is also located in this room, which allows the player to manage upgrade modules and access any storage on a docked vehicle. The health and energy of the vehicle can also be viewed on this console.

In between the two engine room doors is the loading port for the Decoy Tube. One Creature Decoy can be loaded here, or five if the Cyclops Decoy Tube Upgrade is installed.

This section is the largest open space on board. Thus it is a good place for the player to place large stationary items such as Fabricators, Lockers, or Indoor Growbeds.

The engine room is located at the stern of the vessel. The engine takes up almost all of the space in the room, leaving only a narrow passageway on either side for the player to walk down.

This is where the Cyclops' six Power Cells are located, three on either side of the engine. The player can check the charge status of each Power Cell and remove or replace them with LMB.

A wall-mounted fire extinguisher can be found on the port outer wall.

The player can dock a Seamoth or Prawn Suit within the Cyclops by approaching the middle of the keel, similar to the Moonpool. There is only space for one vehicle to be docked at a time.

Seamoths and Prawns will recharge while docked, draining power from the Cyclops' power cells. Vehicles in the Cyclops will also be repaired automatically if the Cyclops is equipped with a Cyclops Docking Bay Repair Module.

The keel section of the Cyclops has five built-in Storage Lockers, each containing 18 (3×6) units of space. The diving chamber is located here, which allows the player to embark and disembark from the vessel through a hatch.

The Ramp Section is located beneath the Engine room, and serves as an access route between the Engine room and the Vehicle Bay. It has a small amount of room on the walls for smaller wall mounted objects like Wall Lockers and Fabricators.

The Cyclops can be customized using the onboard Cyclops Upgrade Fabricator located on the starboard side of the engine room.

Upgrades can be installed and removed via a six-slot panel on the port side of the engine room.

Where do I install the Cyclops Upgrades?
I've created some Cyclops upgrades, but for the life of me I can't figure out where to install them. I've been all over the ship, inside and out.