The PRP is a Nelson based poppet valve equipped Pump operated marker, with auto-trigger capability. It features a gas through grip frame, fall-away hinged receiver with tool-less field strip, toggle on/off/de-gas ASA, "cocker" threaded barrel, and ICD logo billet grips. The PRP is currently available in black only. It is 100% American made in our Nampa, ID shop and has an MSRP of $499.95

If you need additional support, you may contact ICD directly. Our technical support hours are Monday through Friday, 9:00 a.m. until 4:00 p.m. MT. We generally close at 3:00 p.m. MT on Friday.

The PROMASTER is a high quality marker specially
designed to meet the needs of the professional style tournament player. The
PROMASTER is an electronic solenoid actuated computer controlled marker. The
major components of the PROMASTER are machined from solid, aircraft-grade
aluminum, and then hard anodized. No castings are used in the construction of
the PROMASTER , thereby providing the end user with a high-quality,
precision-engineered marker.
Paintball markers get a lot of abuse. Indian
Creek Design, Inc., has designed the PROMASTER with this in mind. All internal
parts, wear and contact surfaces have been heat treated or hard anodized. The
toughest and most resilient materials and components have been used in the
design of this product.
The PROMASTER uses a single standard 9-volt battery
for operation. The circuitry is a microprocessor based digital
controller.
The PROMASTER operates on low-pressure. The main operating
pressure is 250-300 PSI nominally adjusted to visually via the gauge on the
primary (input) regulator. The secondary pressure is factory pre-set and
regulated to 85-95 PSI. Gas usage is controlled through these 2 internal
regulators. A unique feature of this marker is the regulator adjustment. This
allows precise adjustment for the velocity control of the marker and for optimal
gas efficiency.
The PROMASTER comes with a removable barrel system. This
feature allows the user to select a barrel that is most suitable for the playing
conditions. All barrels are honed with straight tip porting and stock length is
12″.
PROMASTER Specifications:

Indian Creek Design is back! After nearly 7 years of absence from the paintball community, ICD are showing off a new paintball gun, the PRP Pump. The PRP is a Nelson based pop valve pump gun, much like the Spyder Hammer 7 or CCI Phantom. Nelson based guns have been popular for nearly 30 years, because they are reliable, simple and fairly inexpensive to manufacture due to there limited number of parts. The PRP will also feature a “fall-away hinged receiver” for filed stripping and the best part its Autococker threads!

I really like the look of the gun, it is taking the Nelson based guns into the future, although it does remind me a lot of the Bob Long MVP.

At launch the PRP will only be available in black. At this stage ICD will be taking pre-orders for $499.95.

ICD is likely best know for there Bushmaster paintball guns and possible one of their more recent guns the Freestyle.

More as the story develops.

The original Promaster was a mechanical blowback paintball marker manufactured by a company called Line SI, which was then partially owned by Jerry Dobbins, the current owner of Indian Creek Designs. It was one of the first stacked-tube semiautomatic designs in paintball in the late 1980s to early 1990s. When ICD set out to redesign the Bushmaster (itself named after Line SI's famous pump) in 2005, the Promaster name was resurrected to help promote the new model. Other than its name, the current Promaster shares nothing in common with the original.

The Promaster has a significantly smaller profile than its Bushmaster predecessor. It is an electronic solenoid-actuated computer controlled marker. The major components of the marker are machined from solid aluminum, and then hard anodized. The stock board can operate in semi-automatic mode, ramp automatic, ramp, and ramp burst. All modes can be capped at 15 bit/s (balls per second) or completely uncapped. Modes are selected by changing switches on the circuit board under the marker's grip.

Designed to operate on low-pressure. The main operating pressure is 250–300 PSI, which can be monitored via the gauge on the primary (input) regulator. The secondary pressure is factory preset and regulated to 85–95 PSI. Gas usage is controlled through these two internal regulators. CO
2 is not a recommended propellant for the Promaster or any electropneumatic marker, as the cold liquid CO
2 can destroy a solenoid valve. Instead, regulated high pressure air or nitrogen systems are recommended although CO
2 may be used if an anti-siphon tube has been installed inside the CO
2 bottle.

Since the Promaster is able to reach firing rates of over 15 bit/s (30 bit/s is claimed by Indian Creek), it will operate best when used with a force-fed hopper such as Vlocity/Vlocity Jr, Halo, Empire B, Pulse, Fasta, and or a Dye Rotor. However a force-fed hopper is not absolutely necessary and an agitated, or other electronic hopper, may be used with the Promaster at lower rates of fire (i.e. Viewloader Evolution 2 or 3, Revolutions, Halo TSA Frontman and Backman, Ricochet Apache, etc.)

There are many upgrades available for the Promaster. One upgrade that must be bought immediately is a bottom line setup, the most popular of these being an on/off valve style ASA (air source adaptor) with a macroline hose. Any 45 style grips will fit it and all Autococker/Intimidator barrels will work as well. The feedneck is threaded into the body and can be replaced with any Bushmaster-style feed neck, such as the feednecks manufactured by AKALMP, CCM and ICDU. Another very popular upgrade among Promaster users is the Indian Creek Designs Underground Cylinder Assembly. It consists of a new cylinder and ram unit as well as a quick exhaust valve, or QEV and hose barb. The low pressure regulator pressure can be dropped significantly after this upgrade. This increases the Promaster's air efficiency and cycle speed as well as reducing the amount of recoil felt when firing. Another advantage to adding the ICDU cylinder is the hammer can be removed out of the back of the gun, resulting in an easier maintenance process for the user. Other popular upgrades are replacement high pressure regulators, low pressure regulators and valves that offer higher air flow and consistency, resulting in higher paintball velocities at lower air pressures, thus increasing the Promaster's efficiency. Aftermarket micro-processor circuit boards are available from NOX, Kila Products and Vaporworks. The Promaster shares the same circuit board type as the newer ICD Freestyles. Yet another popular upgrade is widely available on www.ebay.com. It is a Delrin bolt link pin, which links the bolt to the ram hammer. It is very popular because it is light in weight, prevents scratching of the body and, is very inexpensive compared to most other upgrades available for the Promaster. Delrin bolts are also available, however the stock bolt has proven to be a strong point of the gun because it is also made of Delrin and no evidence of performance gains has been shown with the use of an upgraded bolt. New high flow solenoid valves are also available from ICDU website as well as Airsoldier.com

One of the main drawbacks for buying a Promaster is that it does not come stock with an ASA, which means that the owner will have to add one before he or she uses the marker.

Many users have reported a "break-in" period before the marker performs consistently, as is common in most markers.

Unfortunately ICD products are generally not as readily available as products from more popular paintball companies such as Smart Parts, or Tippmann, etc. This means that replacement or upgrade parts can sometimes be hard to find, particularly for players living outside of the U.S. 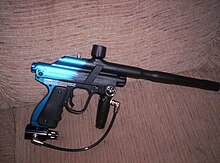 Indian Creek Designs also made a variant of this marker known as the Lasoya Promaster. The Lasoya version has slightly different milling which is more simplistic and comes in a dust finish two tone fade colour. The aggressive "tail" has been removed, perhaps to decrease the weight of the marker. The high pressure regulator is different from the standard Promaster. It is a clone of the well-known Air America Vigilante regulator. Instead of the standard Promaster blade trigger, a new trigger with two finger groves has been added. The bolt is also different as it is made of teflon, instead of Delrin and has a small "ramp" on the top to reduce ball breakage. It also comes with a low pressure regulator gauge so the user can see exactly what the LPR is set at. Another change from the regular Promaster is the feed neck. While it is still not a clamping feed neck, it has a lower profile, resulting in less hopper hits. The board in the Lasoya Promaster was made by Kila products for ICD and is a less adjustable version of their Promaster Drive board. Hence it has been nicknamed the "Kila Lite" board. It features more firing modes than the original Promaster board and an adjustable "debounce" setting.

Like the original, the Lasoya Promaster does not come with an ASA.

The Lasoya finish comes in black/gold, black/blue, black/grey, and black/red. The Lasoya Promaster is available in limited quantity because shortly after they went into production, the contract between Pat Maroch and NPS was severed, causing the production of more Lasoya Promasters to come to an end. 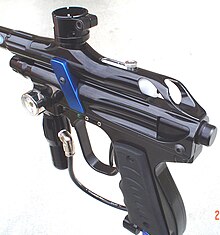 Prototypes for a GS Promaster and an ND Promaster were designed but not released. The GS Promaster was designed by ICD tech Greg Schutte. It has the ICD aftermarket cylinder assembly, BlueFork modified stock ICD LPR, HPR, new ICD clamping feedneck, stock grips, Humphrey high-flow solenoid (same solenoid used in the Freestyle pro) and full predator coding v. 5.0. The GS Promaster looks much like the regular Promaster with a different "tail" design. It was going to be produced as a Private Label, but ICD decided not to proceed with the project. Greg Schutte owns the only existing GS Promaster.

The Naughty Dogs Promaster was made for and tested by the Naughty Dogs. Only a couple of these models were made, and the model was not put into production.