I wish every section was this short.

NOTE: if you choose to use the ZIP file instead, you must also install the MSVC2013 x86 redistributable.

You can either install a stable version of EmulationStation from a pre-made package, or compile the bleeding edge developer version.

Download and install the Debian package, either 32-bit or 64-bit.

Or, compile the latest version yourself.

Make sure everything is up to date

Compile and install it

The RetroPie Project provides an easy way to install over 30 different emulators on the Raspberry Pi, using EmulationStation as a front-end. This is one of the easiest ways to get your Raspberry Pi ready for some retro gaming goodness.

This is a guide for everything you need to install EmulationStation on a fresh Raspbian Stretch install. All the dependencies are in the Raspbian apt repositories.

Make sure everything is up to date

Set the minimum amount of RAM to the GPU

This will take a long time.

NOTE: This will conflict with RetroPie, which installs a bash script to .

Otherwise, you can run the binary from the root of the EmulationStation folder:

Configure EmulationStation and install some themes.

WARNING: Do not edit configuration files while EmulationStation is running. This has been known to cause strange side effects, like overwritten files and melting the polar ice caps.

If you are using a pre-configured distribution like RetroPie, you can probably skip this section.

You might want to read the README.md file as well as this document.

I occasionally refer to this path as . Just mentally replace the with your platform's home folder.

On Windows, the "home folder" is set by the environment variable. To see where that actually is, just type it into the Windows Explorer window and press enter:

So, the complete path to the folder is .

On Linx, this is equivalent to the environment variable. This is where your terminal and file browser should start.

So, the complete path to the folder is .

This is the main configuration file for EmulationStation. It is located at . It is an XML document that defines a list of systems . A system contains the minimum information required to find your games and start them.

Here is an example, with comments:

Notice all s are listed inside of one tag.

If you want to add another system, just add it like so:

Systems are displayed in the order they are defined.

NOTE: If a system does not have at least one game present (that matches the extension list), it will not be displayed.
If no systems have games present, you will get an "invalid configuration" error!

EmulationStation will not restrict the names you pick for themes. However, in the interest of keeping installing themes a simple drag-and-drop process for everyone's setup, please use one of the following as your system's theme name:

NOTE: These are case sensitive on Linux.

(if it's not here, you are free to make something up, since a theme probably doesn't exist for it yet)

This is the list of valid platforms you can in a tag. The platform is used when scraping to provide more accurate results. You can use more than one platform.

NOTE: These are case sensitive.

(if you suspect this is not up to date, check )

Launch commands depend on what emulator you want to use.

If you're using MAME, should do the trick.

The following strings are replaced in your launch command:

If you used the Windows installer or Debian package, a set of default themes should already be installed (to on Windows and on Linux).

As long as you used a name from the list above, you only need to download and extract the theme set to . If the folder doesn't already exist, just create it.

After that, select the new theme set in , like so: 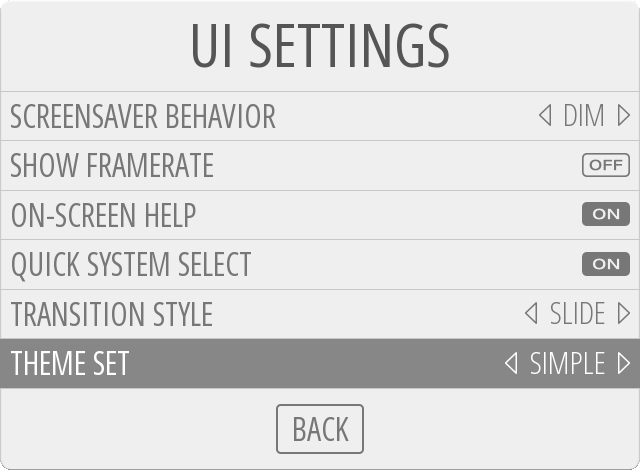 There's no dedicated Themes page on the website yet, but the official theme can be downloaded here.

Hi, have your heard about RetroPie? The most famous emulation software os Raspberry Pi. Today, I will tell you, how can you install on Raspberry Pi OS.

RetroPie now is installed. To start RetroPie, run the command

RetroPie on the first running will have no emulator options. To add new options, just add your ROMs on the respective folders on the path .

If you want to start RetroPie on boot, just follow the steps on the Raspberry Pi OS terminal:

RetroPie works with all kind of USB Joystick controllers, but if you have a Playstation 4 controller, you can use in wireless mode. Follow the steps bellow to configure:

Thats it! Now you can play your retro games with you PS4 controller without any cable. Bye!

Building your own custom RetroPie image can be really slow, so I created a simpler way to do it using Docker and bash scripts - introducing docker-build-retropie-image!

Creating custom prebuilt images was becoming painful. I would burn the base RetroPie image to my sdcard, then I would copy any roms or BIOS over. Afterwards I would take my sdcard back and make a backup of it which created a new image I could then reuse.

So now this is my new automated flow with Docker and bash scripts:

Now the whole process is fast and simple! The solution is using Docker too so it works with MacOS, Windows and Linux.

See the docker installation guide for help installing it.

Whilst testing with Docker for Mac, deleted files from the volume were seemingly gone from both Mac and the Docker container... but not really!

For example I do in MacOS and then in the Docker container I do and I see this:

Why!? I should see instead. It might have something to do with Docker for Mac's limitations but currently I have no workaround for this.

Try this new flow out for yourself, I found I spent a lot less time copying over everything manually via SSH or USB. Now I can spend more time on getting my custom RetroPie image correct and rebuilding it very easily.