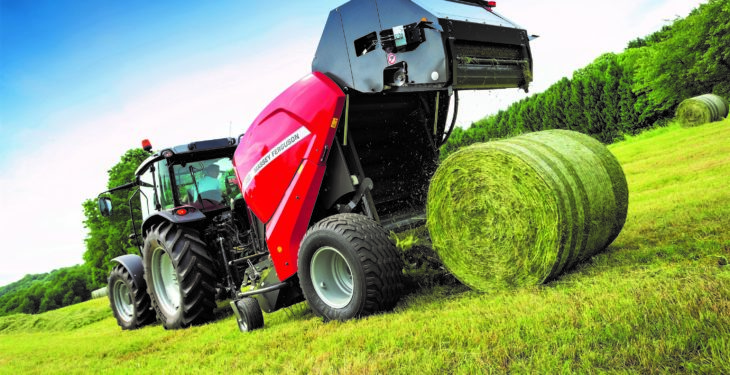 Massey Ferguson branded versions of Welger round balers have broken cover. The machines will make their official debut at next month’s Agritechnica show in Hanover, Germany – on Massey Ferguson’s stand.

This news follows closely after the launch of Fendt-branded Welger balers, details of which have already appeared on AgriLand.

This development, like the earlier Fendt story,  follows on from news – earlier this year – that AGCO was to purchase Lely’s ‘forage’ division, including its mowers, tedders, rakes, (Welger) balers and wagons.

The deal includes the transfer of ownership and control of the German factories in Wolfenbuttel (balers) and Waldstetten (self-loading wagons) to AGCO. The employees will also ‘move’ from Lely to AGCO.

This will leave Lely to “focus on the development of robotics and other innovations in dairy farming”.

Fendt-branded Welger round balers are expected to arrive here in Ireland next year. Will Massey Ferguson versions arrive at the same time?

Similarly, Lely Tigo forage wagons will also become available as Fendt-badged products. These are not expected to arrive on the Irish market until later – possibly even 2019. When, if at all, will we see these break cover in Massey Ferguson colours?

It is still unclear what the long-term, future strategy is for Lely-produced mowers, tedders and rakes. These are currently built in Holland. It’s unknown whether AGCO will build them elsewhere (and, if so, in what livery) or “consolidate” its line-up, given that it already has mowers, tedders and rakes in its own line-up (courtesy of its tie-up with Fella).

Massey Ferguson’s so-called RB Series (essentially updated Welger machines) will consist of five models, including fixed and variable-chamber machines. Designed to cope with hay, silage and straw, Massey Ferguson claims that they incorporate a number of patented and unique features.

Customers are now able to buy a well-proven, quality baler from their local Massey Ferguson dealer.

“The addition of these balers enables Massey Ferguson to expand its world-class range of hay and forage equipment, as well as provide arable operators with the industry’s most respected variable-chamber round baler,” he added.

The balers are fitted with a positive, mechanical tailgate lock, to “ensure uniform bale diameter and density, while reducing power consumption”.

The MF RB Series is also available with a range of options, including air brakes, wider pick-ups and larger tyres.

All important assemblies are protected automatically.  A double clutch system in the flywheel provides a flexible drive, which automatically reduces peak power. The feeder fingers are fitted with an electro-hydraulic monitoring system. Overloads in the intake area are detected and / or corrected as early as possible. This gives:- High bale throughput: No need for shear-bolts: High bale density: Low shock load on the tractor transmission.

Shaft drive to ensure reliable synchronisation
All components are driven by torsion-proof shafts and gears. Knotters, needles, feeder and packer are perfectly synchronised to the ram: one of the most important requirements for excellent reliability.

Welger D 4060 - D 6060
For Every User - the Right Baler  With the development of these new Big Balers, Lely proves, once again, its capability of leading the field, due to its ability to listen to customers. These skills are complemented by more than a hundred years of experience in baler manufacturing, resulting in machinery which benefit the large scale farmer and contractor.

Power efficient - Reliable and easy-to-use
More and more is expected of farm machinery to-day, it is therefore essential that they are efficient and easy to use. So many functions are operated electronically, or electro-hydraulically. This requires a positive, stable power supply, which is difficult for some tractors.

Both the Welger D 4060 and D 6060 Big Balers provide of an on-board power source and therefore are independent from the tractor.