What if "Zootopia" was an anime (Comparison)

What if "Zootopia" was an anime (Preview Comparison) (4K)

Digital anime artist who is widely known for his eponymous YouTube channel. He has earned popularity for his original 3D anime animations, timelapse videos detailing his artistic process, and translations of popular games and cartoons into 3D anime.

He was born and raised in the Philippines.

He has amassed more than 900,000 subscribers to his YouTube channel. One of his most popular videos there, "What if 'The Amazing World Of Gumball' was an anime," has earned more than 15 million views.

Information about Mike Inel’s net worth in 2021 is being updated as soon as possible by infofamouspeople.com, You can also click edit to tell us what the Net Worth of the Mike Inel is

He and Akidearest are both known for their original anime artwork posted to YouTube.

Mike Inel's house and car and luxury brand in 2021 is being updated as soon as possible by in4fp.com, You can also click edit to let us know about this information.

For the channel to improve, it would help to work on the following metrics, which are areas the channel underperforms its peers.

On the other hand, this channel over-achieves its peers when it comes to:

View Growth: This channel's View Growth of 3.66% is 79.33% higher than the topic average of 2.04%. All activity starts with views. The more there are, the more opportunity there is to grow by engaging viewers.

He reuploaded another version with audio included on July 18th, 2009, gaining over 2 million views in total. On January 1st, 2013, the video "Drawn with Me: I Love You" was uploaded, as a "gift for Draw with Me fans." The video description stated that it is not the sequel to the "Draw with Me" video, although a sequel is possible. It has acquired over 644,000 views and 25,000 likes.

In 2011-2012, he remastered and made the animations and act title cards for the dating sim Katawa Shoujo, in which he communicated Four Leaf Studios by email, and surpassed the team's expectations. He also contributed to Katawa-Shoujo's fifth illustration book: Imperfect Spectrum.

Mike Inel's first Gravity Falls fan art animation was posted on August 30th, 2014, as a GIF, with over 11,000 notes. It is also said to be remastered as a video and will be uploaded on YouTube. Another of his animated GIFs, titled "Biting Twins" was uploaded on Tumblr and Deviant Art.

On October 9th, 2014, he uploaded an animation titled "What if 'Gravity Falls' was an anime?," the first of his "What if?" animations. The video is a recreation of one of the scenes from the Gravity Falls episode "Golf War." It has accumulated about 6 million views and 100,000 likes. On January 18th, 2015, he uploaded "What if 'The Amazing World of Gumball' was an anime?," recreating scenes from The Amazing World of Gumball, which has gained approximately 7 million views and 142,000 likes.

The latest from KYM

About a week ago, this pop-punk adjacent jingle got stuck into the internet's head started from an October 12th TikTok. TikTokers started singing the 'Burger Queen' anthem in their own videos, spreading the lyrics as a catchphrase to other platforms.

The annual trend of putting increasingly absurd things inside Halloween candy and making PSAs about it started in 2011 with Jacksfilms and is still very alive to this day.

There always was this delicate balance and control over what about the project was transparent and what was not. We were open and very honest about what it was like to make KS, but never wanted to really explain what exactly we were doing. Not having our work under constant scrutiny from the outside made it easier for us to work, and left all the actual content in the game a mystery up until the release.

So, when we unexpectedly got the chance to reallysurprise everyone with something super fancy, we decided to keep it a complete secret. This however lead to us having to hide one 4LS member from the public spotlight completely up until the release, which has been hard. To remedy that, I'm going to tell you the story of Mike Inel. 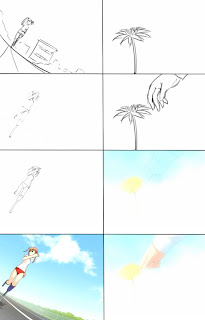 It all began from an e-mail...

Mike contacted us out of the blue, offering to animate an opening sequence for KS since he was a fan of the game. Now, there's something you have to understand here. Since Act 1 was released, we've gotten dozens, possibly in the hundreds, inquiries from people wanting to join 4LS to work on KS. We've accepted noneof them. The reason for some of the declinations was that we didn't want to add features like voice acting, but in most cases we already had all the people we needed, and we had galvanized into a working unit. There was simply no need to recruit more members who we would've needed to somehow find a niche in the team for, and then get them up to speed.

But Mike could do something none us could, animation. He also was exceptionally good at what he does. And animations are something that was easy to add in the game, as they only require the technical implementation. So we got interested. We wanted him to work with us. However, we really liked the OP sequence from Act 1 and didn't want to replace it, so we started thinking if there was some other good place for animation in KS. A credit/ending animation could've been ok, but it's not really where you put your most visually impressive stuff. Animating parts of the story didn't feel like a good idea. So, we ended up with a plan for 5 short animations for the beginnings of each of the paths, sort of like second OPs. It was more work than what Mike initially offered, but he was happy to take it up. And so, Mike became the only ever member of 4LS who applied and got accepted post Act 1 release.

I can't remember how it ended up like that, but Mike worked differently from other 4LS members. Instead of the usual IRC/forums/MSN, he and I corresponded through e-mail, with the normal 4LS feedback/iteration loop going through me to both directions. Anyway, that style of communication worked nicely for everyone, as it allowed me to distill the feedback to Mike, which increased his efficiency, and on the other hand, the rest of 4LS only had to bother themselves with the bits of the animation production that were pertinent to them. I don't know if the arrangement was actually better than if Mike had just worked similarly to the rest of 4LS (likely not, at least not significantly), but it worked out so there's no problem.

We originally envisioned that the animations would be maybe like 15 seconds long at most, just little interludes that are visually striking and serve as a good way to communicate the beginning of the girls' stories. When Mike completed the first animation, Shizune's, it was something like 51 seconds long. That was, of course, amazing, but I was thinking in horror whether Mike would be able to pull off making all 5. If he couldn't, we'd have to drop them all and his work would go to waste. He wouldn't let me down, however.

Months flew by, we mailed back and forth every day, storyboards, sketches, concepts, ideas, progressing forward stage by stage. Mike's own ambitions grew as he worked, and the animations became much longer, much more elaborate and much more impressive than anyone originally thought they would be. At that time the act title cards were not done, as they were right at the bottom of the artist TODO list. We thought it would be fitting that Mike would illustrate them, to have visual uniformity, but he already was doing way more work than anyone expected. Regardless, he took up this job too.

It took almost a year for Mike to complete all 5 animations and 16 title cards. But even after all that, he wasn't done. Nope, he wanted to revise and expand some of them, and when delta suggested he reimagines the OP sequence in his own animation style, he did that too.

And so, almost 13 months, 337 emails between him and me, and the longest ever thread on the development subforums later, Mike had completed the 5 story animations, the reworking of the opening sequence and all the act title cards. All by himself.

Overall, I feel that the production of the animation sequences was easily the cleanest and most succesful part of the KS project. The unique communication style, Mike's professionalism and us having learned our lessons all made me feel really positive about our capabilities. Generally speaking, many things in the KS project were dragged down by the baggage accumulated through the years, but with the animation production we all started from a clean table, and it was a smooth, fun ride for the most part.

The best part about working on KS to me has been the people I've been working with. To me, 4LS is something really extraordinary. Exceptional individuals who I've befriended and stuck together for years, working together towards a common goal, figuring stuff out together, growing as creators together, having fun together. We always said that even if nobody would ever read KS, making it would still be worth it, and that still holds true.

Tomorrow will be the second part of a long, long story that I probably don't remember half of anymore.

I’m aiming to make my Patreon successful, thus, any commissions, requests, collaborations, or job opportunities are impossible for me. I’m sorry.

A: With or without permission, you're free to post it under these three simple conditions:

1: No money involved. (Free in short)

3. You won't claim it's yours unless it's a collaboration between us. (I rarely do collabs)

Q: What if it's an old commissioned artwork you made, am I free to repost it too?

A: Old commissioned artworks belong to their respective clients/commissioners. Please ask for their permission instead.

A: However, if you're the client/commissioner of the artwork, feel free to do anything you like.

Q: I made a fanart of your work. Should I credit you?

A: Not necessarily, but you could.

Q: I made something that was inspired by your work. Should I credit you?

Q: Can I cosplay one of your works?

A: Sure!! (Credits are optional)

Q: What program do you use for drawing? (and painting?)

A: Unity. I use Ren'Py too for visual novels.

Q: Do you use tablets?

Q: Can I request an artwork from you?

A: I'm sorry, but I only do requests to close friends.

Q: Are you available for commissions?

Q: Have you ever considered making tutorials?

Q: What university did you attend to learn how to (insert art-related verb here)

A: None. I'm undergraduate.

Q: Where did you learn how to (insert art-related verb here)

A: Self-learning and free online tutorials.

Q: Any tips or tutorials?

A: I want to see something I haven't seen, so I'll try making it instead.

Q: How long did you practice drawing to get to the level you're at now?

A: The longest time I can remember.

Q: Why aren't you replying to our posts?

A: I find it difficult to answer hundreds of posts. But believe it or not, I'm reading them all. In fact, I'm even excited to read them.

Q: Are you a Filipino?

* Graphtreon's Best Guess for unknown earnings is based on a creator's number of patrons, and the earnings of similar creators that do publish earnings information.

More specifically: it's calculated by taking the average earnings per patron in the same category, adding/subtracting the standard deviation from that average to get both extremes, and multiplying by the number of patrons. These estimated earnings are calculated solely by Graphtreon. No actual earnings data for such creators is provided or endorsed by Patreon.

Creators may opt out of "Best Guess" by contacting Graphtreon using the contact form.