I'm a lifelong model railroader, and I particularly enjoy track planning.  Over the years I've become a fan of "railroad prototype modeling" – that is, trying to replicate the appearance and operations of real railroads as faithfully as possible in miniature.  Applying this philosophy to track planning presents particular challenges, because few modelers have enough space to reproduce prototype track layouts and distances in scale and still maintain operating interest.  But that's the fun part, isn't it?

I can only design one layout for myself.  So I have offered to more than eighty other modelers and had a great time developing track plans for them, many of which are included in my gallery on this website.  If you're in need of a plan, feel free to contact me.  Due to the popularity of this I have had to start charging for my services.  If you are interested, please contact me for a quote.

I've also learned to design for 3D printing.  You can buy many of my designs on my Shapeways shop, and I can also design custom parts for you if you supply photos and dimensions.  Just contact me.  And I've designed model-railroad themed websites including the site for Caboose Industries.

I'm scheduled to deliver two clinics.  Hope to see you there.

I had the privilege of visiting Bob Chapman’s HO scale, Cincinnati-based layout recently to see his work first-hand, and it was a non-stop parade of beautiful trains and meticulously built models.

Bob loves many railroads, so his layout is loosely based on the Cincinnati area in the transition era where he can model most of his favorites. The centerpiece of Bob’s layout is a giant model of the Cincinnati Union Terminal which also serves as a staging yard for several passenger trains. Adjacent to the passenger yard is a freight yard which serves as staging for freight trains comprised of expertly modeled and weathered cars including some fantastic coal hoppers. One end of the layout is anchored by a large turntable where more than a dozen beautiful steam engines are parked, and the other end is home to a scratchbuilt coal tipple.

This setup perfectly showcases Bob’s modeling which runs from custom weathered brass locomotives and cabs to expertly kitbashed coal hoppers and scratchbuilt pulpwood flats. Bob doesn’t let the lack of a commercially available model stop him, and his modeling skills are well matched by a methodical and realistic approach to weathering. Every train is full of beautiful locomotives and cars making it a joy to just sit back and railfan.

You can see Bob’s work on several pages including L&N Models, C&O Models, B&O Models, N&W Models and PRR Models. While you’re at it, check out some new model photos by Jeff Kuebler on the L&N Models page and Ed Lorence on the B&O Models page.

“1) I am a strong proponent for using any brand of Automatic Transmission Fluid for track cleaning. With an initially hand cleaned track, apply ATF with a Q-tip at about 1 inch per rail for every 2-3 ft.

ATF has conductive additives that will keep the track clean for many days but, it is an oil so use sparingly or you will quickly loose locomotive traction. The right balance is required for best performance. Also good for cleaning locomotive wheels sparingly.

2) Best approach for a track cleaning car or vehicle is to use an old diesel locomotive that has the driving equipment remove but has the heavy frame available for downward pressure.

By using stick-on furniture felt pads available at any hardware or most discount stores, you can create a great track cleaner and you can easily replace the stick-on pads by pulling off the old pad and sticking on a new pad.

The stick-on pads are available in a variety of sizes to fit virtually any old heavy diesel locomotive frame.

Below is a gutted Kato n scale diesel with a stick-on pad. Simply push it around with a good powered locomotive. 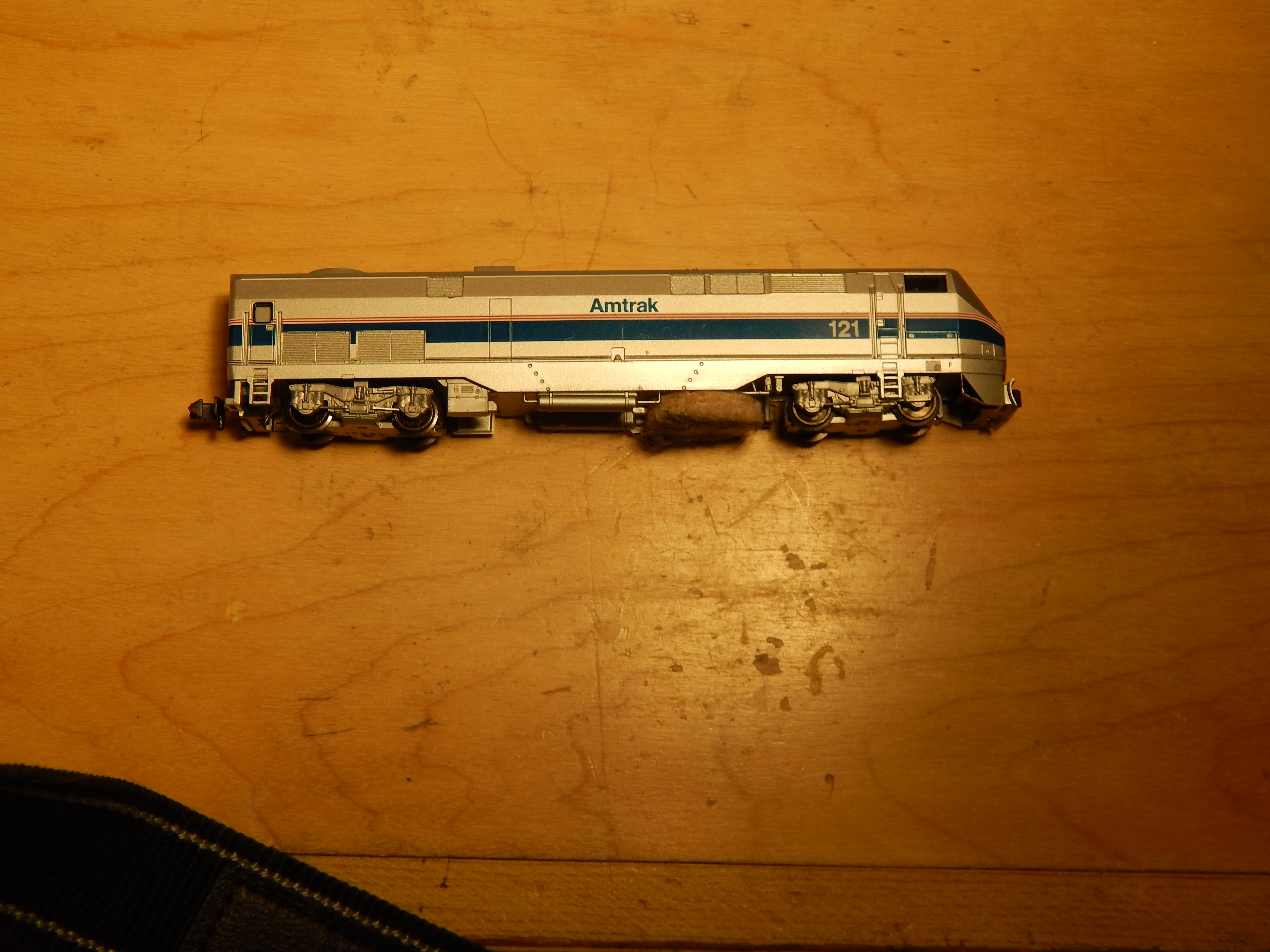 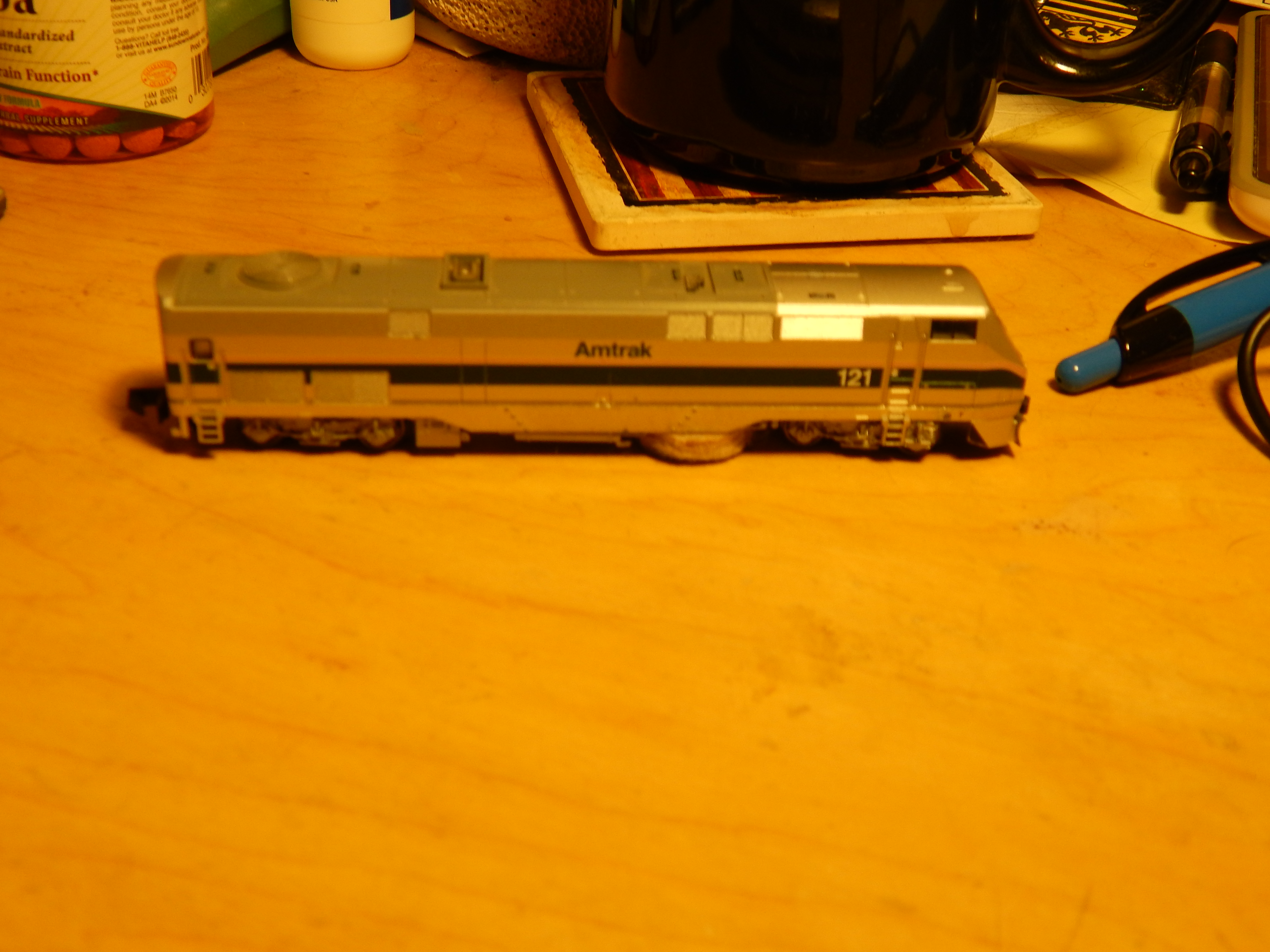 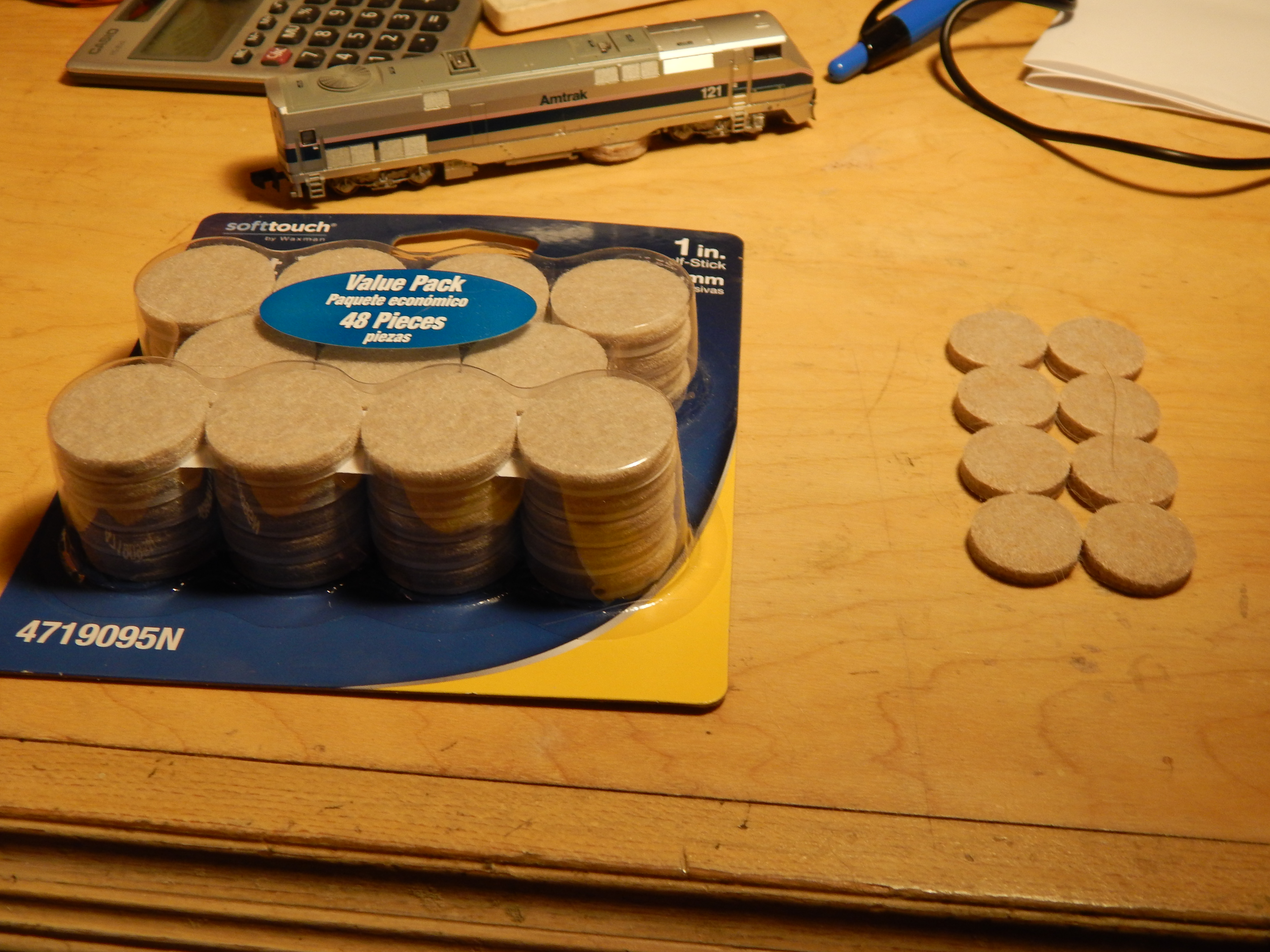 3) When you have a sluggish locomotive, check your track with a good running locomotive from another track before assuming you need to clean the track.

Quite often you may need to clean the wheels, wheel contactors or the motor brushes.

And now on to Dave, who’s been having fun with his iphone thnngy:

Big thanks to Bob. When ever I get a track cleaner idea in, I’m always reminded of Kim’s, (which is here). It could scrub anything clean.

Adventures in Miniature - Märklin model railroad set in Germany in the 1960s, plus landscaping, DCC, and scratchbuilding tips

Albulabahn RhB in H0m - Modular layout in 1/87 (HO) scale featuring the most spectacular points of the RhB Rhaetian Railway line over the Albula Pass in Grisons, Switzerland

Brian Lambert Web Site - Follows the construction of an OO gauge layout based on the LNER in the 1950s, plus modeling hints, tips, and DCC guide

Burgerbahn - Complicated HO layout from the steam era, based on German stock and architecture to the 1940s

Chaleur & Restigouche Railroad - HO scale layout depicts eastern Canada and the general area from Campbellton and the Bay of Chaleur to Chatham N.B. in the late 1970s

Chessie System East End - Point-to-point HO scale layout representing the Cumberland Subdivision in 1982, plus info for modelers of the B&O, C&O, and WM

Chicago, Burlington & Quincy Railroad in Wyoming - Prototype info about the CB&Q Casper line and the C&NW Lander line, plus an HO scale model railroad based on these lines

Dave Parks' Baltimore & Ohio and Western Maryland - HO scale layout represents the WM and B&O in and around Cumberland, Maryland in 1953

Great Northern on a Shelf - Documents the design and construction of an HO scale model railroad that depicts scenes from the Great Northern Railway between Havre and Great Falls, Montana in the late fifties and early sixties

HORailroad.com - Photo tours of model railroad layouts by Ken Spranza and others

Iceman & Son's HO Railroading - Over 300 pictures of a Santa Fe HO scale layout, with all paint schemes of the two mergers from 1983 to present

Mesquite Belt Railroad - A 20'x40' HO layout based on MKT's Houston to Ft. Worth mainline, housed in an MKT designed depot circa 1930

Model Railroads by George Booth - Models the Colorado & Southern Railway in 1968 along the Front Range from Denver to Ft. Collins, Colorado

Portage Model Railroad - HO scale model railroad layout based on the Pennsylvania Middle Division circa 1865-1885 between Harrisburg and Altoona, Pennsylvania

RioGrandeSouthern.Com - HOn3 model railway based on the RGS between Ridgway and Rico, Colorado circa 1941

Smugglers Division - Freelanced double track railroad modeling the Union Pacific in HO scale, from the end of steam to the last caboose

Teton Short Line - HO scale layout that has been evolving since 1965, frozen in the late 50s and early 60s era; by Wayne Roderick

Trains for the Ages - New and used HO scale model trains, track, and accessories for sale and auction

Tri-ang Model Railways - Overview of the Triang Railway scene and related products, manufactured in the 1950s and 1960s in the UK

Tri-ang Railways - Photos and information about the model trains, structures, and accessories produced by Tri-ang from the 1950s to early 1970s

Yosemite Valley Railroad - History and HO scale model railroad of the 77-mile long shortline that ran until 1945 between Merced and El Portal, California